Mighty Micros is a Batman toy series and this is a game made after it, probably for promotional purposes.

Mighty Micros is a Batman toy series and this is a game made after it, probably for promotional purposes. Anyway, basically what you get in the package is what you see and play in this game.

There's a Catwoman, her car, Batman, also with his bat-mobile and a couple of gadgets, including batarangs as well as the crystal gem, the one Catwoman stole from the bank. Just like in a real world toy series, here in game you play as Batman, driving his car through the busy streets of Gotham, chasing Catwoman with intention to bring her to justice and of course to return the stolen diamond to the bank.

This is an original DC comics flash game, not some reworked piece of junk made by 3rd party unknown indie 'developer' so you should expect top-notch graphics details and glitch-free ride through an amazing 3d sculptured streets of Gotham. There's a lot of ramps, making the ride even more fan and it almost looks as if you are on a roller-coaster. 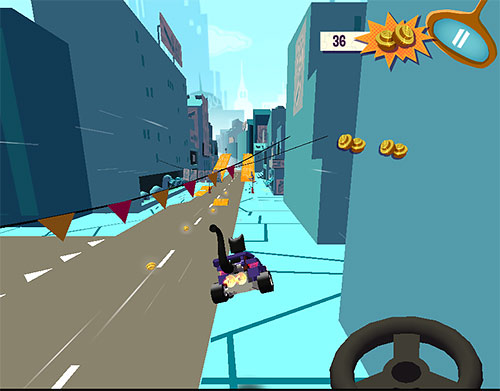 You don't get to see Catwoman cached actually. Instead you do your best in chasing her and collecting as much coins as you can, trying to avoid obstacles which to be honest won't damage your car, but will definitely slow you down. At some point Catwoman can even shoot at you, so you need to shoot back - by pressing the space bar button. Others than that, for the most part you will only hold the steering wheel, turning it either little bit to the left or right with your mouse.

Getting through the settings panel could be quite tricky. Not sure what developers had in mind when they created those stages and why Batman needs to eat popcorn before the next round, but don't get surprised if you spend few extra minutes there trying to figure out how to get on with it and return to the actual game. As you will see, besides Batman, there's Bane and little Flash-kid. Unfortunately, these guys are initially locked. Not sure if you can get them unlocked at higher levels but if you do, plz let me know that down below in comments.

Walkthrough and gameplay by rrvirus(youtube)

Batman Drive - Classic Di…
I don't know why there are so many games about Batman and him driving a motorbike. Just plain dirt bike ride …

The Cat And The Bat - Uti…
Batman is living his worst nightmare - Catwoman has stolen his precious utility belt. Without it he is lost an…

First Try - Lego
Developed by Warner Bros, this little game is based on an actual scene from the movie. And isn't Lego Batman s…

Batman Shooter - Classic …
Has Batman escaped - One hint - the worst is yet to come! That what you hear in a background is a famous tun…

Lego DC Mighty Micros - D…
Mighty Micros is a Batman toy series and this is a game made after it, probably for promotional purposes. Any…